The Best Worst Year of My Life

In January I moved into my current art studio in an office suite turned art venue in what is now known as the Pinellas Arts Village. I became Gallery Coordinator for Studios at 5663 and began serving on the Artist Selection Committee for the arts district. In the meantime I took on curating the art and artists for a few venues on site and in downtown Saint Pete. I applied for my first ever artist grant. I was not awarded it, but learned a great deal in the process and have already applied for next year's round. I began volunteering, leading groups of LGBTQ Youth in expressive art sessions.

Musical genius and iconic creative Prince died, leaving me and so many stunned with shock and to learn a new kind of mourning many of us were perhaps unfamiliar with...that of someone we never actually knew. Prince's music, style and persona shaped so much of how I viewed life and what I aspired to do with it. His songs gave me permission to be me. They transcended gender or sexuality and made me feel one with the world. A day without Prince music in my studio is rare.
But Prince was not the only one taken from us in 2016. The deaths kept coming and many of them ruthlessly chipped away at the youths of us Gen-X'ers. Right up until these last few days, which took George Michael and Carrie Fisher. At times it seemed the year would not allow us to catch our collective breath.

This year's election barreled over us like a reckless tank, crushing everyone in its path, inciting blatant racism, misogyny, homophobia and xenophobia and tearing apart long-standing friendships as if they'd never mattered to begin with. Bernie Sanders filled the hearts of  Liberals like me with energetic hope for real change. We were saddened when he conceded but then many of us readied ourselves for another historic presidency...this time by a woman. Instead we witnessed a cartoon character of a contender who against all reason became our next President elect, leaving us with not an embarrassment of riches, but a richness of embarrassment.

But, politically speaking, many lessons were learned as well. I learned that some Liberals can be equally dismissive and hateful and that some Conservatives can step up to the plate and show kindness and respect...support, even. I ventured into many grey areas. At my favorite pub I stand before a giant confederate flag and sing along to old tunes and look upon a crowd of many colors, sexual identities and orientations. Yes, it can be confusing and I am hopeful the flag will someday be gone, but I know that I am welcome there. There's a pride flag there as well, on the door and not as large, but it is there. And there's drag bingo as well...as I said...confusing. It is a place in transition; a crossroads, of sorts. Grey areas are real.

This was the year homophobia and hate came to my door and into my home, literally. While not a "crime" technically, the cowardly anonymous hate letter my partner and I received invaded our privacy and the sanctity of our home. I have been the subject of disapproving stares and unkind words as well as exclusion due to living true to who I am...but I never had that hate follow me home and walk so effortlessly through my doorway.

If I knew who the small person who wrote the misinformed and misguided letter I would thank them today. I would, because if not for their bitter act we would not have come to know so many of our neighbors who stood beside us in support. From such ugliness, camaraderie and fellowship were born. Never will I keep quiet or cower in the face of hate. 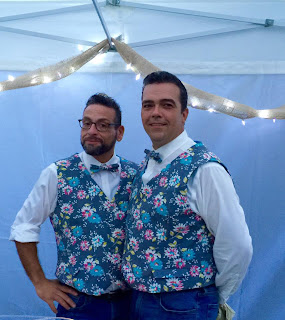 This was also the year I was selected to showcase my work at an event for an internationally renowned museum and painted my first (of I hope many) mural in the city of St. Pete. But among all of the good that out-weighed the bad and weird one cannot be surpassed. 2016 was the year when I said "I do." before close friends and family to the love of my life. It only took us nearly 20 years...but I would wait another 20 if I had to. No amount of celebrity deaths or orange imbeciles winning the White House could overshadow making a life commitment to one's soulmate and knowing that while many may still disagree, our union is legally binding and recognized the same as any other.

The year twenty thousand and sixteen taught me much about myself, what I can endure, overcome and achieve. It also showed me that kindness and joy is abound in the oddest places, if you bother to look. All in all 2016 was a mixed bag of treasures and turds. Here's lookin' at ya, 2017!

Posted by John Gascot at 4:46 PM No comments:

This year leaves most of us in need of a little healing. I could think of no better (or hopeful) symbol for that than E. T. the Extraterrestrial's glowing finger. Silly, I know.
Prompted (because "inspired" feels an odd word) by what feels like unprecedented cultural loss in 2016, of generation x youth, specifically, expect a series of Save the 80's Latin Pop paintings and a group show art call in the coming weeks/months.

Posted by John Gascot at 1:40 PM No comments: 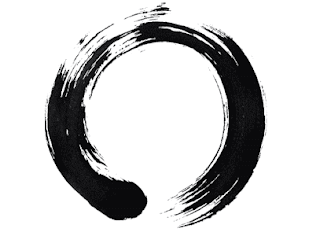 What best way to come down from the mad rush of the holiday season than with a show about inner-peace? Zen will focus on images which convey wellness and balance.

Pom Pom's Teahouse and Sandwicheria, St. Pete invites Tampa Bay artists to submit entries for its upcoming exhibit Zen. Artists may submit up to 5 quality images (at least 500x500 and no larger than 1000x1000 pixels) of available small works. Each entry should measure no smaller than 8" x 8" and no larger than 16" x 20".  All work must be properly wired and ready to hang on a display system upon delivery (no sawtooth hangers, wire only.).

Zen will run from February 6, 2017 through the month of March. Commission split is 30%, with 70% to the artist. Please submit images along with Title/Medium/Size info for each to: jgascot@gascot.com
Submission deadline: Sunday, January 22.
Acceptance emails will be sent by Wednesday, January 25.
All accepted works must be delivered on Sunday, February  5, 5:00 pm.
An opening reception for this exhibit will be held on Saturday, February 11, 6-9pm during St. Pete's Second Saturday Art Walk.

If you wish to receive email notifications about future artist calls or if you are submitting for this one please join the Artist Call email list via the link below:
http://eepurl.com/bIofsz
Posted by John Gascot at 5:22 PM No comments:

The Cider Press Cafe, St. Pete and I (as curator) invite Tampa Bay artists to submit entries for its upcoming exhibit La Gran Frida.
This group exhibit will begin its run during Frida's last month at the Dali Museum (just minutes away). It will focus on themes and imagery directly or indirectly inspired by Frida Kahlo, the artist, her story and/or her works. You may submit up to 10 quality images (at least 500x500 and no larger than 1000x1000 pixels) of available works. Each entry should measure no less than 10" x 10". There is no size limit and medium to larger works are encouraged and welcome. All work must be properly wired and ready to hang upon delivery.

La Gran Frida will run from February 28th 2017 through April 30th, 2017. Commission split is 30%,with 70% to the artist. Please submit images along with Title/Medium/Size info for each to: jgascot@gascot.com
Submission deadline: Sunday, February 12.
Acceptance emails will be sent by Wednesday, February 15.
All accepted works must be delivered on Saturday, February 25th, 10 am.
An opening reception for this exhibit will be held on Saturday, March 11, 6-9pm during St. Pete's Second Saturday Art Walk.

If you wish to receive email notifications about future artist calls or if you are submitting for this one please join the Artist Call email list via the link below:
http://eepurl.com/bIofsz
Posted by John Gascot at 1:47 PM No comments: