A "velorio" is a wake. In Puerto Rico (as in many Latin cultures) the body of the deceased is often laid out for viewing at home. Neighbors, friends and family gather to pay their respects or say last goodbyes. There is always food and often music. Crying, singing and laughter are all sounds heard at a velorio.
I remember going to my first one at around 5 years of age. Doña Mary (Mrs./Ms. Mary) lived two houses away from us. She was heavy-set and dark skinned with wiry wild hair. She was loud. Her voice, no matter how sweet her words, always sounded chastising. As a child, I was afraid of her. But my mother was not. My mother befriended Doña Mary and while neighbors steered clear of her she was often at our house. I can close my eyes and imagine myself looking out our front door and seeing the backs of Mom and Mary swinging on porch rocking chairs and chatting away over a strong cup of cafe negro.
Doña Mary's son lived with her. He was greasy and lazy...and abusive. I don't know whether she had other children or where they might have been but one day my mother received a phone call from, of all places, the morgue. Her number had been found as emergency contact in Doña Mary's wallet. She had been struck and dragged by a bus less than a mile from our homes and my mother was called down to identify her body. Not long after, we had to go pick up her belongings (or perhaps someone took up a collection, it was so long ago and I so young) from her place of work. She was a cafeteria lady at an elementary school. Much to my mother's surprise all of Mary's co-workers knew who she and I were when we arrived. She spoke to them about us as if we were her daughter and grandchild.

The imagery in this painting romanticizes her wake just a bit. Her house was drab and there were perhaps less flowers or ceremony. Unshakable, for some reason is the memory of mosquito netting draping over her casket to keep bugs at bay during what was probably a nearly-summer month. Unforgettable also is the fact that at the time Mom was unemployed and we did not have much money so we could not afford flowers from the florist. A Peace Lily plant (given to her by Doña Mary) had just come into bloom. Those were the flowers we took to the wake.

Posted by John Gascot at 5:25 PM No comments:

I am in the process of starting a new series I'm calling Boxed. I stumbled upon this concept while painting pedestals for our studio gallery. I'm quick to announce new series because I feel like it's  a good thing to put out into the world thoughts and concepts that excite us. Sometimes I make premature announcements and a concept loses steam and falls by the wayside, but there's no harm in that. I feel strongly, for a number of reasons that this one will see the light of day and possibly then some. 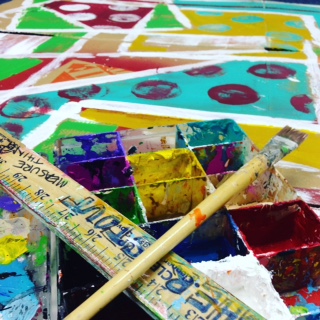 I'm a fairly good recycler of things and pride myself in not being terribly wasteful. I do forget to shut the water off while brushing my teeth...nobody's perfect. Whenever possible, I pack my own artwork for shipping, using already used boxes. Sometimes they're boxes I've received things in; sometimes they're moving boxes still hanging out in our garage from previous moves.

It was one of these moving boxes that I split open and used in place of a tarp when painting the pedestals for our gallery. After 3 or so uses I began to fall in love with the outlines left behind and the wheels began turning in my squeaky, but still functioning brain. My first thought was to simply create large "industrial" decorative abstracts which I could offer at a lower price point (given their size) due to a lower production cost afforded by reusing materials rather than buying large canvases. I was also motivated by the idea of getting the chance to paint large with ease of storage. With this goal in mind I put paint to can-, wait no, cardboard.

As the first piece started to evolve the materials (not only used cardboard, but bits of tape and labels) inspired thoughts about what a moving box means. They hold our prized possessions, hopefully keeping them safe in transit. They hold and carry our lives (necessities as well as cherished items and memories) from one place to another; sometimes again and again, sometimes across the planet. They perform an incredibly important role in our life journeys yet we view them as dispensable and insignificant items. Only children seem to find new meaningful, if only temporary, second lives from them as forts or robot costumes. As a child I remember we would use them as sleds with which to slide down grassy hills. This is what I wish to explore with this new series. Who knew I'd be going on about a cardboard box like this?

At the moment I envision the pieces being abstract, but that is not to say that fragments of representational images won't make an appearance. I am also interested in possible collaboration or input from sources...meaning, I might ask that recently-relocated people provide me with a box from their move and incorporate narratives of their moves (reasons for the relocation, hopes for their new home or details about the items the box carried) into the works. Boxed is but an itty bitty newborn art baby right now and I hope to watch it grow and blossom into something substantial.

I hope all of this made at least a bit of sense. I am off to play with boxes. 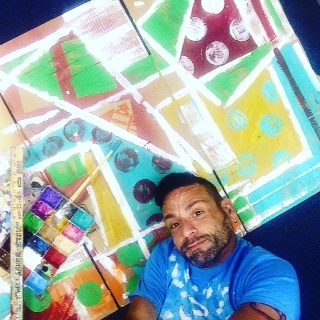 Posted by John Gascot at 2:27 PM No comments:

The Studios at 5663 (5663 Park Blvd, Pinellas Park, FL) will proudly host ArtMode 2017: Art Meets Fashion on Saturday October 22nd, 2016 (time TBA). This will be the inaugural presentation of what is planned to become a yearly event at the Pinellas Arts Village/Creative District. We are currently accepting submissions from local and regional designers and fine artists who wish to create and showcase 5-10 piece micro-collections of original and unique artwear. Collections may be Avant garde in nature, but they must be wearable, not costumes. Proposed collections may be submitted by teams comprised by members of any given combination of the aforementioned art and style fields or by individual creatives. Everything from artful daywear to dramatic evening pieces and statement jewelry will be considered for showcase in the jurying process. If it’s wearable and artful, it will be considered.
Please submit photos and sketches with a brief description of collection concept as well as a list of team-members (if group submission) to event organizer John Gascot: jgascot@gascot.com
Selected samples of past works which might help support your eligibility or concept are also welcome.


Submission Deadline: Friday July 1, 2016
Notification: All submitting will be notified of acceptance or otherwise by no later than Friday July 15.
Show Date: Saturday, October 22, 2016.
A fee of $25-$50 per collection (depending on size) will apply to final round artists/designers who commit to showcasing at the event. All fees will be applied to promotion and execution costs.
SUBMISSION IS FREE.

Posted by John Gascot at 9:32 PM No comments: